The Web, The Future & Augmented Reality

What is augmented reality and why does it matter when the internet is already so immersive? That’s a fair question, "why does it matter;" however, a targeted question could be, "who is it going to matter to?" The answer will be most people who use the internet today because it is certainly not a fad and it will change how we interact with technology, information and each other forever. 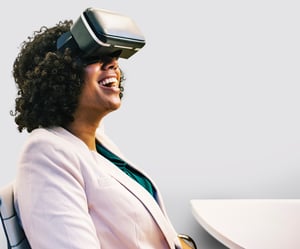 Okay, let’s back up; first, what is augmented reality? While the photo on the right looks like it could be AR, it's actually more than likely virtual reality (VR). The two (AR & VR) often share similar technologies with one another but have drastically different applications and could have vastly different audiences.

Since there are many overlapping similarities between AR (Augmented Reality) and VR (Virtual Reality). To clarify, we will quickly discuss some of the key difference between them and give some examples of platforms you might have used that you didn’t know were actually augmented reality in disguise.

Some Examples of AR Applications

Status of AR and VR

Currently VR and AR are in their infancy. The technology is still hitting mainstream in very particular and niche ways, just look at Pokemon Go. However,  according to Hubspot “By 2020, the economic impact of virtual and augmented reality is predicted to reach $29.5 billion” https://blog.hubspot.com/marketing/vr-marketing-examples

As well as Hubspot, other tech publications are seeing AR and VR being truly impactful in the near future.  According to Techcrunch.com, “Our new base case is that mobile AR could become the primary driver of a $108 billion VR/AR market by 2021” https://techcrunch.com/2017/01/11/the-reality-of-vrar-growth/

This is some pretty compelling and honestly astounding numbers from industry experts who are talking about an a new technology that’s really only been in the hands of mainstream consumers for a little under two years.

How Does This Relate to Your Business

There are a few ways it can relate, however it’ll differ from industry to industry and company to company. Here are a few possible examples of how AR can be utilized.

Augmented Reality Through a Browser

Chrome Browser support for augmented reality is still being developed, but should arrive within the next year. Augmented reality would allow users to “place” objects in their room by using their smartphone’s camera. It will have real spacial detection and lighting detection via advanced machine vision. The Benefit to allowing a user to place an item you sell in their house or business is that they’ll be able to envision how the item would fit into their lives. Also, the user may be able to tell which size or model of the item would work best for the space they’re trying to accommodate.

Currently the two largest smartphone platforms (Android and IOS) are both integrating augmented reality into the very core of their respective operating systems. Some examples of this are Google’s soon coming implementation of AR into their Google Maps application.

With this new way to interact with the navigation process, it is only a matter of time before Google will start letting companies advertise or be highlighted while en route. Maybe google will have a wander kind of mode where augmented reality suggestions are made and the user gets instant feedback on the businesses they’re close to; either way, the future of interaction is going to change and the giants of the smartphone world will be paving the way.

Apple as a company may be taking the idea of AR into a new generation of devices. On the horizon, Apple is supposedly to be creating AR glasses as part of their hardware lineup. The timeline for these glasses and the application for said glasses are still very much being speculated. Some of the advancements Apple is making in the AR and VR space are fundamental to their growth in the future and will no doubt spill into the realm of commercialization and consumers.

The way in which we interact with information and each other will always evolve and change as technology, culture and norms change; however, with the advent of virtual reality and augmented reality, it is poised to change forever in the not too distant future. I really wouldn’t be surprised if traditional office setups were replaced by a single pair of AR glasses, a wireless keyboard and a mouse. No monitor needed, because you’ll always be wearing one.