How to Deal with Google's Swiftly Changing Algorithm 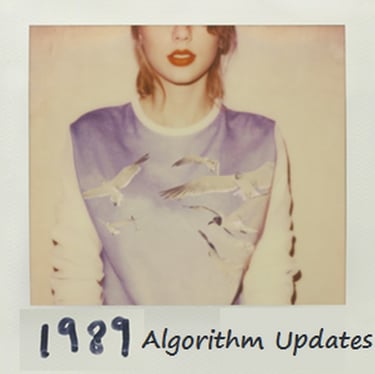 As the saying goes, “Change is good.”, but in the world of SEO, change - as dictated by Google, Master of the Universe, can be flat out annoying. From preferred ranking factors to full algorithmic overhauls, not a week goes by when the eyes of SEOs don’t roll at Google’s latest decree. For SEOs reading this and nodding vigorously, it’s going to be okay. We’re going to make it through this together, even if Google changes the rules more often than T-Swizzle changes boyfriends.

Be Calm
So, I think the first order of business is to step away from your computer and shake it off. Close your eyes and just listen for a moment. That sound you hear is the collaborative sighs and groans of SEOs around the world. You are not alone. Everyone’s frustrated, and nobody is doing EVERYTHING Google wants, because that’s literally impossible. With that said, we should all still be trying to appease Google to keep our sites healthy and our clients happy. If we take this one update at a time, we’ll continue our love story with Google and prevent bad blood.

Be Aware
Wondering where to start? Inform yourself about the biggest things first; the things Google is actually admitting it’s planning to do. Rumors run rampant about what Google’s next plan might be, but unless Google is the source of the information, it probably doesn’t warrant panicking right away. Take Panda 4.2 for example, Google has been open about it from the get-go. It began rolling out in July and will continue to take effect over the next few months. Touted as a “refresh” rather than an update, it’s really just a reapplication of the same signals as the previous Panda, which is adorably easy to remember because it’s really hard to tell pandas apart. More adorable still, very few have reported seeing any effects which can be directly attributed to this refresh. Phew, or too soon to tell; nobody knows.

Be Informed
While it’s too late to make changes in time for the effects of the seemingly tame and fluffy new Panda, Google’s algorithms are constantly being studied and analyzed to help the rest of us predict which ranking factors to pay attention to. Certain patterns have continued to move in their expected directions, for example, backlinks are steadily becoming less important and that’s unlikely to change. Conversely, the importance of responsive functionality continues to rapidly increase following April’s Mobilegeddon. URL structure is getting more important, specifically the importance of having a short, concise, and relevant URL for each page. There’s also been some talk of H2’s gaining importance, which is likely just because they serve as an algorithmic indicator of organized and reader-friendly content. Above all, the rule here is, if you see something that seems like a pattern, it’s not an accident, but likely something Google is making happen behind the scenes. Pay attention to these patterns and act accordingly.

Be Prepared
Still squirming in your seat, trying to prepare for whatever Google update is coming next? Use this simple checklist to get caught up and give your site its best chance at SEO celebrity status.


Google isn't likely to stop changing, updating, and refreshing anytime soon, but if you follow best practices, pay attention to patterns, and keep your site updated with the tips above, you and your site will be safe and sound!