When we're not developing WordPress websites, optimizing blog posts, and creating keyword strategies we have lots of different interests like playing trivia, cleaning trash out of Casco Bay, and eating donuts - just to name a few. We're a well-rounded bunch who are always up for a challenge and when I suggested to the team that we author some limericks for National Limerick Day, they did NOT disappoint.

What is a limerick?

A limerick is a silly type of poem, consisting of a 5-lined verse, with the AABBA rhyming schema. Many times, the third and fourth lines are shorter than the other lines. 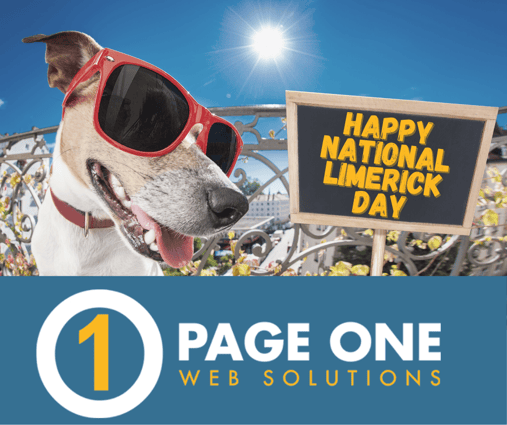 Enjoy these creative and witty limericks and Happy National Limerick Day from the P1WS Team.

An Ode to Incompetence
authored by Chris

There once was a client distressed
Who's website was not yet refreshed
We told them "Surprise!
Hit control F5."
Now on to corporate they've progressed

Ode to Page One
authored by Shayna

There once was a site low in ranking.
Their leads and sales were tanking
They called up Page One.
And we had some fun
Now, some major profits they're banking.

The Best CMS
authored by Jenika

A Small Oversight
authored by Ellis

There once was a site that ranked poorly
Its SEO suffered quite sorely
Then Page One did some trawling
And found that site crawling
Was blocked in the robots.txt